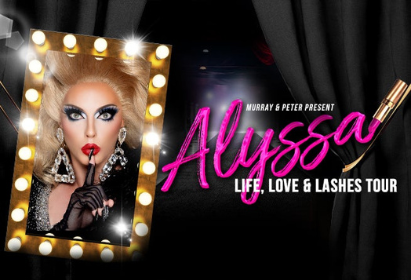 Entitled the Life, Love and Lashes Tour, this one-diva show is a non-stop adrenaline spectacle â pulling back the velvet curtain to reveal Alyssaâs most intimate secrets.Following her sold out, critically acclaimed stint at the Vaudeville Theatre in Londonâs historic West End last year, and her current USA tour, Alyssa promises âlonger lashes, bigger wigs and louder tongue popsâ in this expanded, reimagined extravaganza starting at the Grand Theatre, London, Ontario on Thursday, September 8, 2022.âThis is a side of her that you have never seen before,â said show producer Murray Hodgson. âWe wanted to take the audience on a legendary theatrical journey â touching every arc of the rainbow that is the life of Alyssa. What she delivers on that stage is pure magic, and her fans will be left both shocked and inspired.âSlated as a âlove letter from Alyssa,â the show chronicles her yellow brick road to fame, laced with intimate anecdotes of a young boy with big dreams to the adventures of a budding superstar, and every glitter-filled moment in-between spanning across her 25-year career.The 90-min show is a comedic and campy recital â packed with audacious reveals, gag-worthy costume changes and powerhouse performances by the âDancing Queenâ and her troupe of bodacious backup dancers.Presale begins on Thursday, June 16th at 10:00 am ET, followed by general ticket sales on Friday, June 17th at 10:00 am ET. For more information visit www.dragfans.com.ABOUT ALYSSA EDWARDSJustin Dwayne Lee Johnson, known by his stage name Alyssa Edwards, is an American entertainer, choreographer, drag performer and television personality. With personal appearances and tours spanning the globe, Johnson balances his time between international bookings and teaching at his award-winning dance studio, Beyond Belief Dance Company.VIP MEET & GREET:Â Includes meeting Alyssa Edwards in person at 6pm before the show, plus take pics with her and get autographs. VIP fans will also receive the official tour poster along with a souvenir laminate and lanyard. Please arrive by 6pm. The Meet & Greet ends by 7pm.