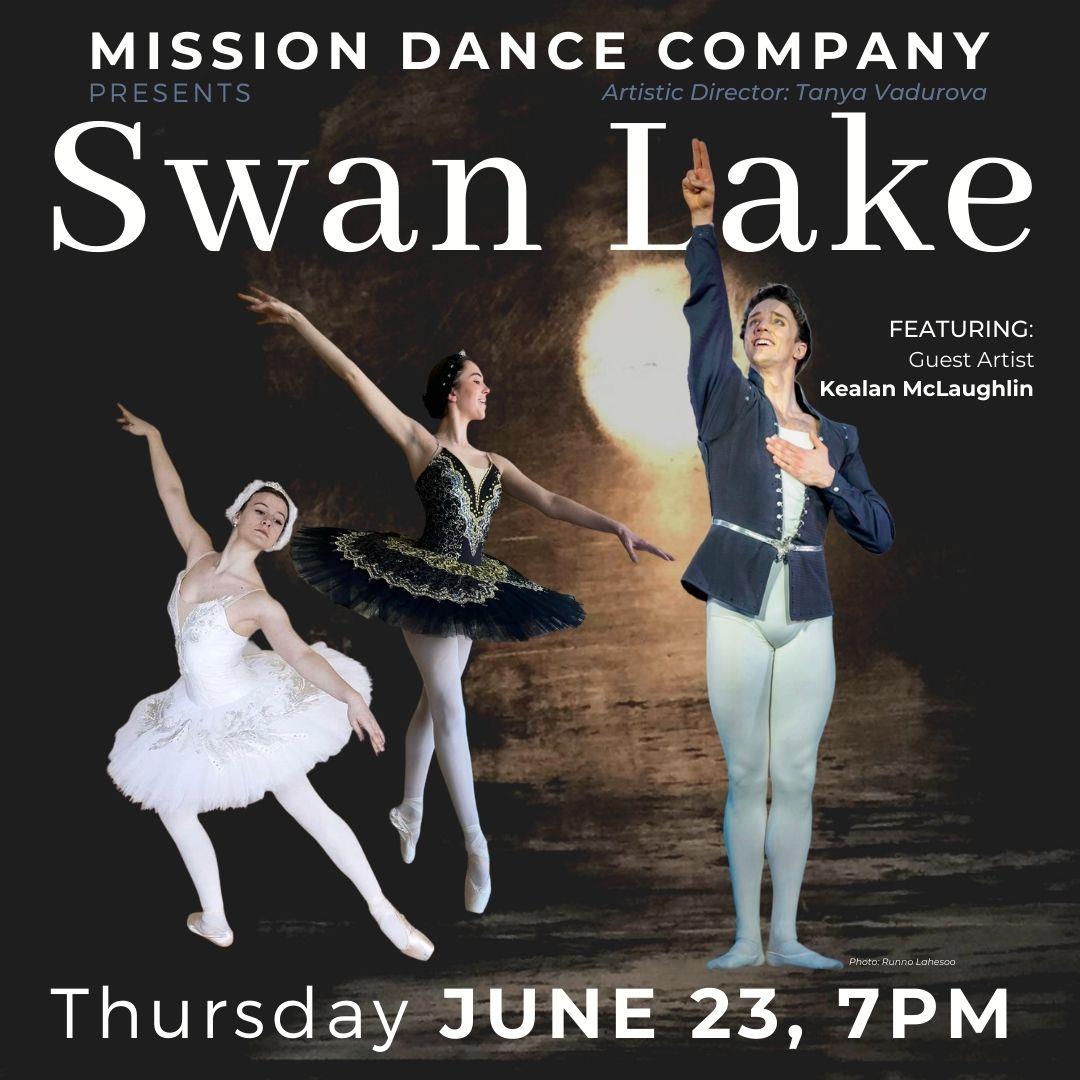 Mission Dance Company is pleased to be bringing the well-known classical Ballet, Swan Lake, to the Mary Irwin Theatre.

Swan Lake is a story of magic, romance, betrayal, forgiveness, purity and love. An evil sorcerer, Rothbart, captures victims and puts them under a terrible spell that transforms maidens into swans. Rothbart has power over all the swans and can direct them as he pleases, especially Odette, the White Swan. Back at the palace Prince Siegfried celebrates his birthday and receives a crossbow from his mother the Queen, as a gift for his special day. He is forced to meet the princesses who dance for him - he must choose one as a bride before the night is over. The Prince is not happy about his mother's forced arrangement and would prefer to marry for love. He asks if he can go to the forest to try out his new gift, so that he can leave the castle and the princesses in order to delay the choosing of the bride. Upon arrival at the forest, as the Prince aims and is about to shoot a swan he finds himself frozen and unable to shoot as he is captivated by the beauty and magic of the White Swan Odette. He approaches her and is finally able to get close to her. However Rothbart spies on the young couple falling in love, and is very upset with what he sees. He tears Odette away from the Prince and tells her to leave the forest. He tries to force Prince Siegfried out of the forest and to the opposite direction. However once Rothbart is out of sight, the Prince escapes Rothbart and finds Odette again.

After realizing that he is in love with Odette, the Prince returns to the castle to tell his mother that he has fallen in love. Once again, his mother forces her son to dance with each princess. Uninvited, Rothbart who has disguised himself, storms into the castle with his daughter Odile, the Black Swan, who he has transformed to look identical to Odette. He introduces Odile to the Queen and Court Nobles. The Prince is in awe that she has arrived, and is confused but happy that Rothbart seems to be allowing him to spend time with who he thinks is Odette. Odile and the Prince dance together after which the Prince announces to the Queen that he chooses her as his bride. Rothbart forces the Prince to swear his love for his daughter. Prince Siegfried, oblivious to the fact that he has sworn his love to the wrong swan, finds himself doomed as he realizes what he has done. He sees a vision of the White Swan, whose love for him is undying, as is his for her. Following this tragic occurrence, the Prince runs back to the forest in order to ask forgiveness of Odette that he has sworn his love to the wrong swan by the betrayal of Rothbart. The purity of Odette's spirit allows her to forgive the Prince. As the Prince tries to swear his true love to Odette Rothbart comes back to fight the Prince but the truth of their love prevails and weakens Rothbart's powers enough to set Odette free to choose her own destiny. Dance Company is honoured to welcome Professional Ballet dancer, Kealan McLaughlin, as the role of Prince Seigfried in their production of Swan Lake this season. Kealan McLaughlin was born in Toronto, Canada and graduated from Canadaâs National Ballet School. He danced in Canadian companies Alberta Ballet and Ballet JÃ¶rgen before joining the Estonian National Ballet as a principal dancer. He has participated as a guest with companies such as Ballet Kelowna, Opera Atelier, CÃ´tÃ© Danse, and DanceTeq International. He has also been a guest teacher within various programmes across Canada.